Running SimuLTE as a network emulator

In this section, the guidelines for running SimuLTE as a network emulator are described.

Running SimuLTE as a network emulator means that the simulation must run in real time and must be able to communicate with the real world, i.e. capturing/injecting packets from/to real networks. This is especially useful for integrating SimuLTE with external real-world applications and frameworks. For example, it allows one to make SimuLTE interoperable with the Intel OpenNESS framework.

OpenNESS is an open source framework that allows to run application on a real Mobile Edge Computing environment. More information on the OpenNESS website.

In the following, we refer to the simple architecture depicted in the figure:

The main components of the above architecture are:

Regarding the emulated network scenario, we refer to the "EmulatedNetwork" example, included into the file "simulations/emulation/EmulatedNetwork.ned" and shown in the figure below. 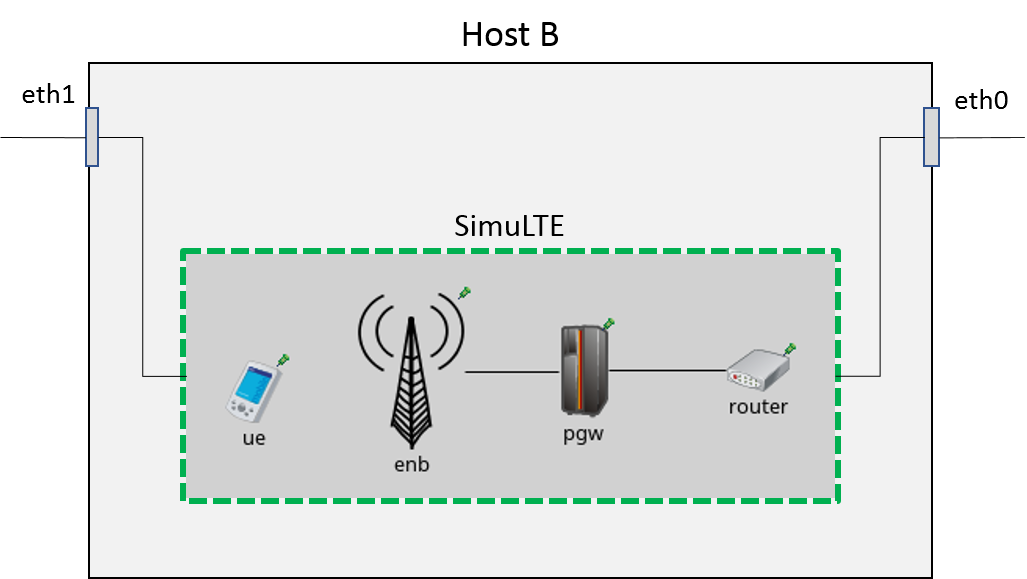 In order to setup the above scenario, the following steps are required to configure the OS on Host B (the one running SimuLTE).

Since the network between Host A and Host B is private, we need to configure the Host B's OS so that it can reroute packets from Host A to the Internet.

Since packets captured by the simulation are copied rather than redirected to the SimuLTE process, we need to prevent original data packets to follow the "legacy" path, i.e. the path that does not go through SimuLTE. This is accomplished by configuring the OS firewall accordingly.

The simulations/emulation folder includes an exemplary omnetpp.ini file. You can use it as a starting point for your own configuration.